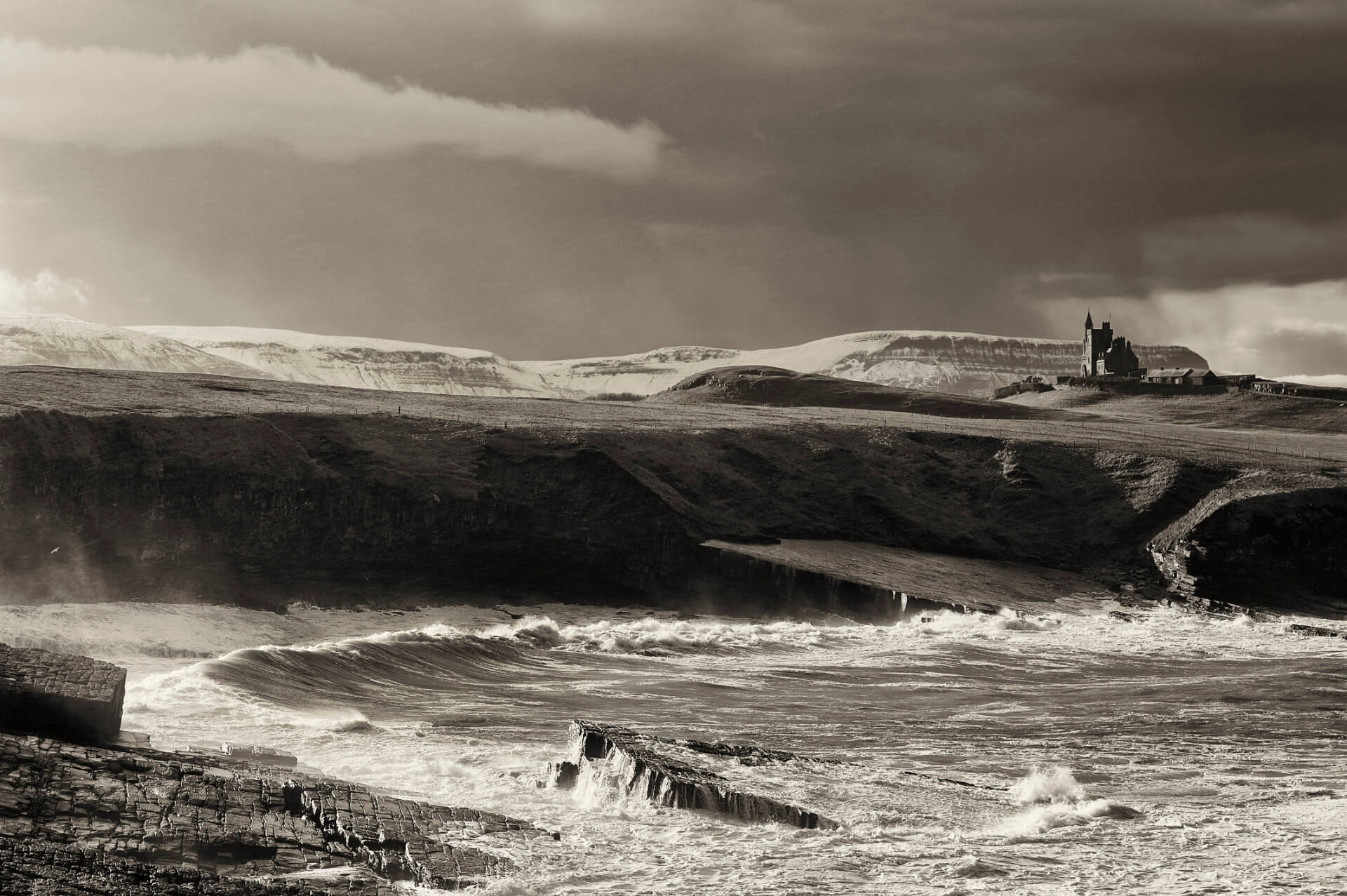 I’d been closely monitoring the conditions in Sligo and I headed there on a day when I figured that I had the best chance of a bit of snow on the mountains. I planned to be at Strandhill beach for dawn to catch high tide.

As I drove in I could see that the waves were wild and that there was snow on the Ox Mountains. I had planned to use my 50mm lens and to incorporate the broad sweep of the beach but I found that it caused the mountains to be too insignificant, so I swapped for my 85mm lens and forsook most of the beach.

I stayed just long enough for the sun to pop up over the horizon a little because the tide was climbing ever closer and my glasses were covered in sea spray. 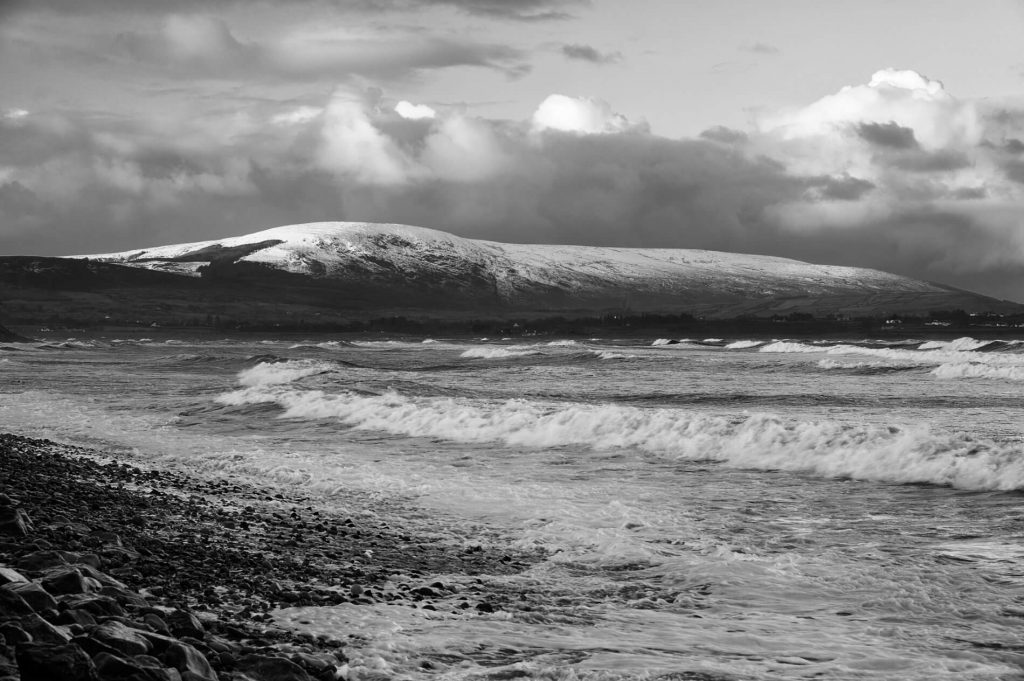 Next I drove to Classiebawn Castle. As I parked as unobtrusively as I could there was a really nice light briefly picking out the castle on the headland. I walked along the road looking for a likely spot to set up. I considered the top of a mound which would bring Benbulbin Mountain higher in the image, but settled for a cliff edge a little lower down.

After setting up the light wasn’t doing anything interesting so I put the camera back in the bag –  to protect it from the elements – and waited. The waves were thrashing against the coast and the sea spray was slowly coating my glasses to the point where it was getting harder to see. Going by the metadata from the shots I took every now and then I waited in that spot for an hour. All the while the light only got worse.

Occasionally there would be a nice patch of light along the coast (the mountains of Donegal were lit up beautifully at one point but they were just a bit too far to photograph) but never where I needed it to be. There was a dark band of cloud stretching right over me which was blocking the sun. The wind was blowing in a south easterly direction and eventually I had to conclude that a gap wasn’t going to open up. The band of cloud stretched all the way beyond the horizon to the north west. So I packed up and left with the intention of coming back some other day for the dawn.

It was as I tried to find my way back to the road through a bog that I happened to glance over my shoulder to see that the light had broken through the clouds. I ran back to my spot, opened my tripod as fast as I could but by the time I’d gotten the camera in place it had vanished again.

However, I was determined to get the shot now. I didn’t have long to wait. I could see the light slowly tracking across the land, heading north. And when it hit the castle I just kept hitting the shutter release, stopping to check the exposure every few shots.

Pretty quickly the light had picked out the entire headland and that’s when it started to rain. But I could see dark clouds heading inland and I knew they’d make a great backdrop, so I kept shooting wishing I hadn’t left the umbrella in the boot.

The light kept tracking north and started to pick out the waves and rocks in the sea. I was so ecstatic that it took a while to realise that it felt like someone was flicking my ears. That’s when I noticed that it was hailing. I kept shooting for as long as I could but the hail was coming down really heavily. My camera bag filled up with hailstones as I packed my gear away to the sound of them pinging against my tripod.

In no time my glasses were useless and I attempted to run back to the car in a myopic haze. I collapsed in the front seat of the car with my lungs about to burst and my feet out the door because my hands were too cold to undo the laces on my muddy boots.

But I got the shot. I’m really happy with it. It was worth the pain in my left hand thumb as the blood slowly returned to it.

Posted on March 01, 2020 by aledowenthomas in Landscape
black and whitemountainsligosnowwaves