It was one of those clear, bright days that happen after snow has fallen and I was going to attempt driving to the top of Croaghmoyle mountain. There’s an RTÉ mast at the summit so there’s a road that leads to that. How far up the mountain I’d be able to get I had no idea until I tried.

When I got to Castlebar the sky turned grey and no sooner had I got onto the first L road than it started to snow. In no time at all the snow was coming down thick and the world had turned white. I was crawling along and any time I did more than tap the brakes the ABS would come on. I thought better of the ascent and headed for the relative safety of the nearest R road, which I eventually joined near Beltra Lough.

I knew there was a good view of the Nephin Beg Range from the lough but as the snow was just lifting I drove on for a look around to let the conditions clear. I saw a sign for a scenic walk and my map showed that I could drive along some of it, so I did. When I reached a farm house I could take the car no further and after a three point turn a great view of Nephin mountain was before me with thin whisps of cloud floating along the mountain. I set up beside the garden wall of the farm house with a unseen dog barking every time I opened the car boot, and although there were plenty of clouds swirling around the mountain, the scene that had caught my attention never materialised again. 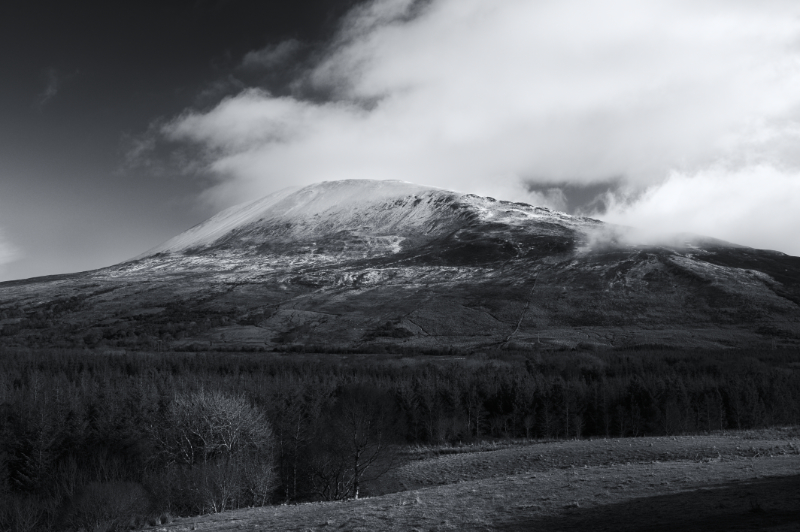 Back at Beltra Lough I had enough time to find a spot to set up before a huge hailstone shower had me sheltering in the car. When the clouds passed the view was amazing, so I rushed back to the spot I had chosen. It was basically the only place where a tree wasn’t in my way, and also the narrowest patch of grass between the road and the lake. If I didn’t stand up straight then my bottom was in the way of oncoming traffic. And after hardly seeing any cars since I left Castlebar it was suddenly like rush hour.

To best capture the scene before me I tried out something that I’d been wanting to attempt for a while – a panoramic image comprising of several shots stitched together (in this case 8). While it wasn’t easy concentrating on getting everything right while stood in my precarious location, it was immensely enjoyable putting this image together in the comfort of my home.

black and whiteirelandlochMayomountainnephin
Posted on February 17, 2018 by aledowenthomas in Landscape