I set off along the trail for Cillin Phédraig church in Mauméan. The Catholic Church was outlawed during the 17th and 18th centuries and during that time mass was held there in secret. People would climb the mountain from the Maum and Inagh Valleys on either side to practise their faith.

As I puffed up the steep and rocky climb I thought about how devoted to their religion the locals must have been to have done this whenever it was time for mass. Then it occurred to me that I was carrying a rucksack weighed down with camera equipment on my back… at sunrise… while my family slept soundly in their beds… for no other reason than the faith that I’d get a good photo out of it. 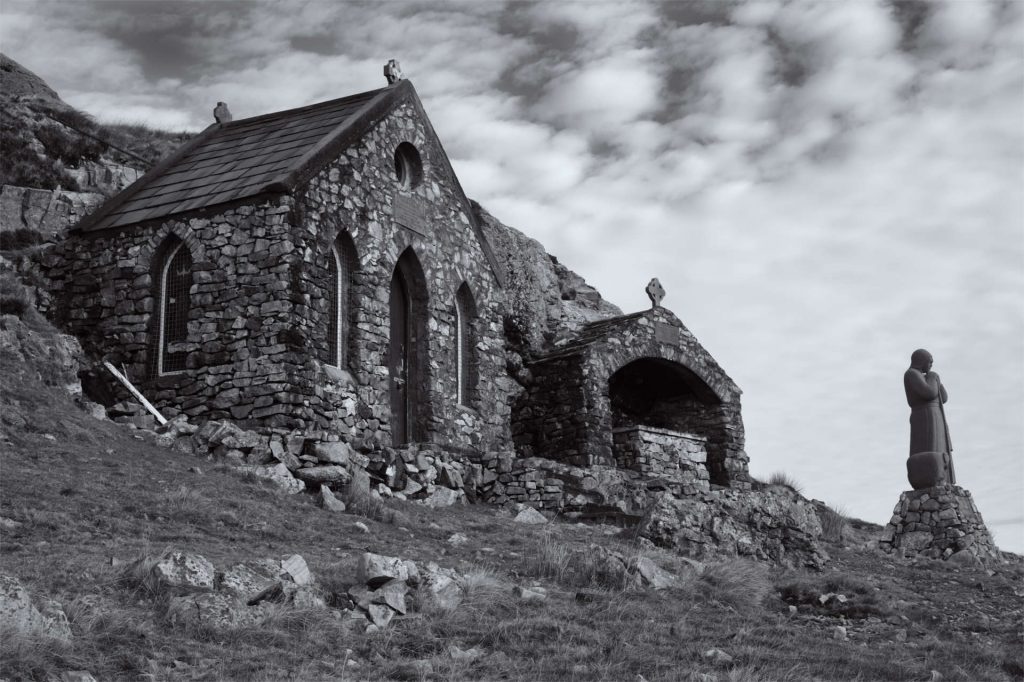 When I got to the church there was a spectacular view down to the mist-shrouded valleys on either side. While I set about trying to find the best angle from which to photograph the church I thought I could hear two men in conversation nearby. I assumed that my mind must have been playing tricks on me because it was unlikely that a pair of men would be having a casual conversation on a mountain pass at first light, but I kept looking for them despite myself, the sound was coming to me so clearly.

Eventually a lone hiker trod into view, we had a chat and he carried on up past the church to the top of the mountain. It must have been him that I heard, I reasoned, and satisfied that I wasn’t losing my mind, I carried on with what I was doing. But then it dawned on me that if it was the hiker that I had heard then not only was he talking to himself but he was doing it in two different voices!

I made it down from the mountain pass without further incident and later during the last light of the day I was down on the valley floor at Ballynahinch Lake, trying to get through a bog without getting water over the top of my boots.

I was there to photograph a castle in the middle of the lake that I’d spotted from the N59 during the summer. While I was trying to navigate that bog I answered my phone to some very good news, so while the image isn’t one of my personal favourites it will always have special meaning to me.