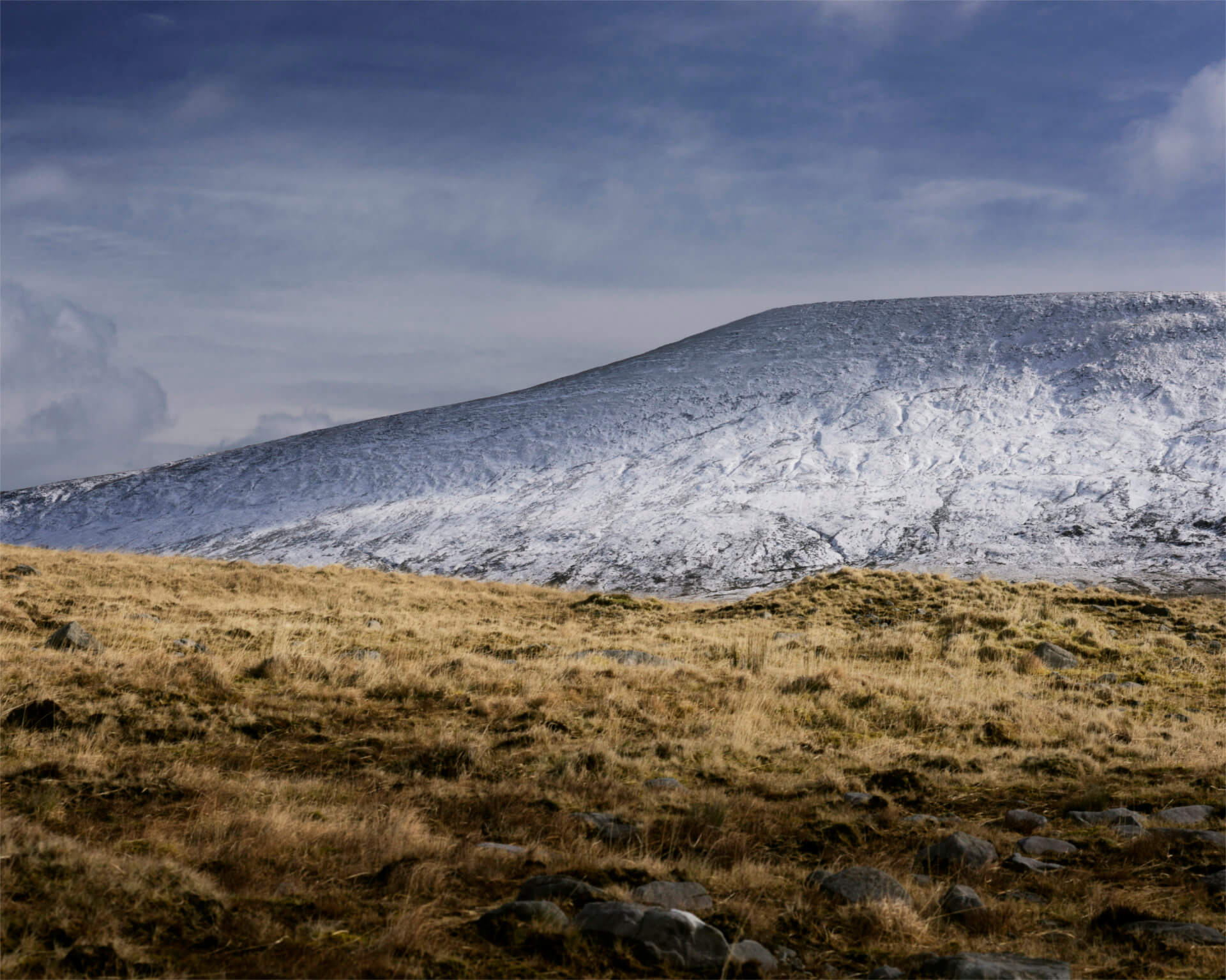 Storm Eunice brought high winds but it also brought snow, so I headed for just north of Newport, County Mayo as the worst of the winds abated. My plan was to walk along Glenamong river on the edge of a forest and somehow head up the moutain range beyond to get to a lough on the other side. I’d planned it all out by utilising an OS map and Apple Maps (because it’s got the best satellite photos), but was to discover that the situation on the ground was different to what the maps suggested. First I encountered an incongruous No Parking sign and then found the track cut off by a fence. I abandoned the car, hopped the fence, and walked the track which leads to the river.

Presently from my high vantage point looking down in to the valley I could see that since my map was published and the satellite photos taken, the forest had expanded considerably, and I wouldn’t be able to follow the river without getting deep into the woods, which I didn’t fancy at all. I could see an alternative route which involved crossing the river but it was going to take a long time to go that way, so in light of the time I would need and the thought of my car being towed by an irate farmer, I decided to head back.

The light was falling in random patches throughout the valley so I stopped to take a few snaps, and after a short while I noticed that the highest mountain peak had disappeared, shortly followed by basically everything west of me, and I knew that I was about to be exposed to a hail storm. I made my way along the track in double time and was thankful I hadn’t decided to tackle the mountain as I’d be sitting on it blind and misserable at that precise time.

I found my car as I’d left it (albeit covered in hail stones), had my lunch, and headed back the way I had come as I’d seen a great view as I had driven along Lough Feeagh.

No longer sheltered by the mountains I was getting battered by the high winds in a totally exposed spot beside the lough. I could see huge drifts of snow being lifted off the mountain tops up into the dark clouds and got off a few shots before the wind got too much. I sat down behind a rock, the only bit of shelter, and tried to wait it out. But eventually I had to admit defeat, and walked over the crest of a small hill, the other side of which wasn’t as wild. There was also had a small dolmen, and it was easy to see why it had been erected there, with Croagh Patrick clearly visible to the south and the close proximity of the mountain range just to the north.

I was considering heading back to the car when I noticed some nice light back over the hill and ran back along the road, where I found a natural crater in which I could hide from the wind. I poked the tripod just over the top of the crater and got off a series of shots for a panoramic just before the light died and I hid back down in the crater. I waited there for the light to return for about an hour, sat on a rock while the wind raged above, but it never did.

Below is the result of that frantic burst of photography. The blurry foregroud isn’t something I’d have included if I’d had the choice, but on reflection I kind of like it, gives the image a bit of a filmic look. The image comprises of 9 shots stitched together and processing it nearly broke my computer and my heart, so I hope it’s well received.