I could just make out the outline of Errisbeg in the darkness as I approached Roundstone, and when I parked I started to doubt my own plans. My intention was to climb Errisbeg in the twilight in the hope that I may get high enough to get a shot of Dog’s Bay and Gurteen Bay as the dawn broke. But it was only just getting light and the mountain looks far more formidable  when you’re looking up at it than it does on the map.

Having recently borrowed a digital luggage scale I knew that my fully laden camera bag weighs nearly 11.5kg so I left the tripod and one camera body in the car to lighten the load. However this would mean shooting hand held, which I hardly ever do. Conveniently my new D810 has this really handy feature called a virtual horizon which indicates – in the viewfinder – when you have the camera held straight.

I made the ascent at speed as I was racing against the sunrise and stopping on an outcrop where I had a pretty good view, I took some test shots before I attempted to climb further along the mountain. When confronted by a near vertical rock face and seeing that there was no straightforward way to get higher up, I went back to the outcrop to wait.

There was far more cloud cover than had been forecast and the light over the bay was completely flat. From my vantage point I could see far to the north and noticed after a while that there was a golden light slowly tracking its way south, so I had only to wait for it to get to me.

Which it did, very slowly. But I was happy where I was and with the bulk of the mountain between myself and the sun I was actually in a good spot to get the shot when it happened. The light eventually covered Dog’s Bay but stopped just short of Gurteen Bay. And then retracted.

By this time I’d fallen into conversation with the only other person on the mountain, who had started off as a distant figure and had suddenly appeared from out of my blind spot.

It took me a lot longer to get down that it did to get up and when I got back to the car I decided to head back to Roundstone, where on a whim I stopped at a boat that I remembered from a previous visit. 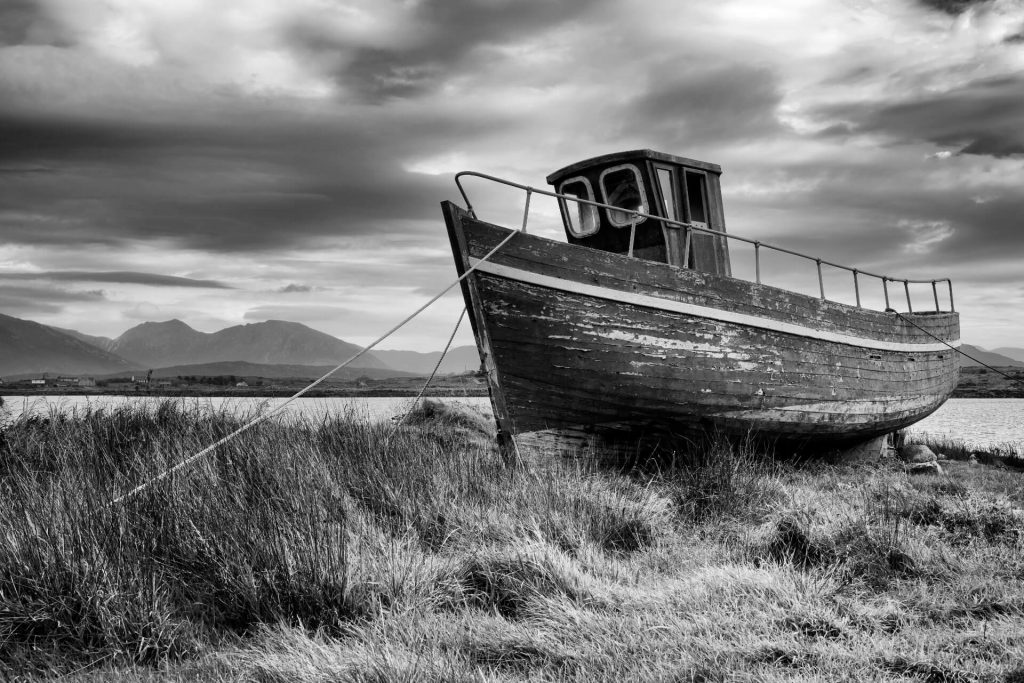