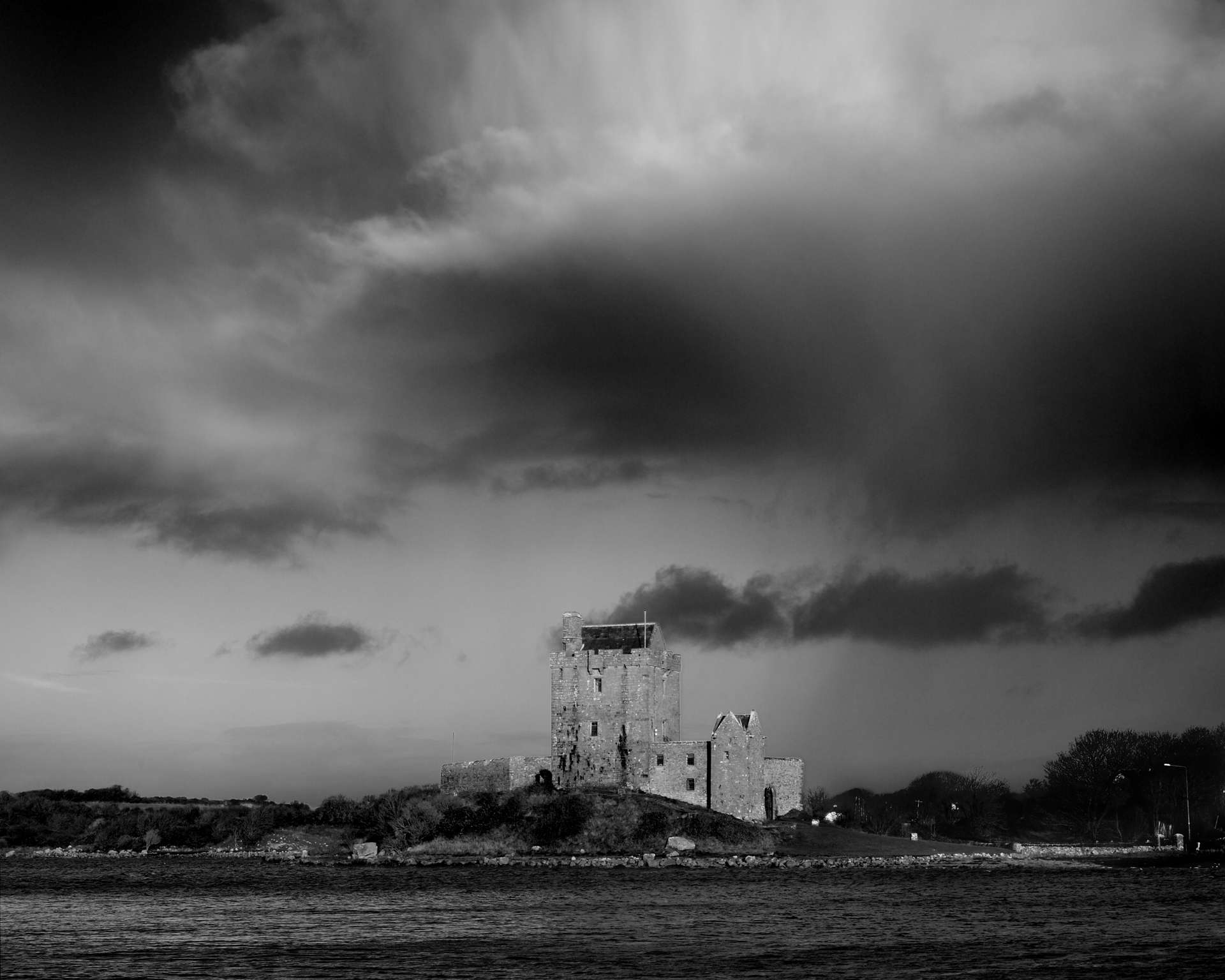 This has to be one of the most photographed castles in Ireland, which is usually enough to stop me from going anywhere near with my camera. But there is something about the towering edifice that I like and I knew that I could capture it differently.

I had a clear idea of the image that I wanted to capture and I needed specific conditions to come together. I needed a day with plenty of rain clouds (for the dark background) but still a decent amount of sun poking through (to light the castle), along with high tide (because it looks a little manky at low tide) occurring around the same time as sunset (when the direction of the light would hit the face of the castle).

I’d been keeping an eye on the weather forecast and the tide times and eventually everything looked like it was going to come together. So I dropped my son off with a friend (thanks Julie) and headed down to Kinvara for golden hour (from 14:20 to 16:20 which I’m aware is actually 2 hours, before you point that out to me).

I got there a little late but I already knew exactly what I was going for, so I took a light reading in the car park, slung the camera with the lens I wanted to use around my neck and under my coat, stuck the polarising filter and shutter release cable in my pocket, grabbed the tripod and umbrella and headed for the spot that I had noted during a visit to Kinvara in the summer. The spot that I’d chosen wasn’t quite right but I found another one nearby down by the water which also offered protection from the worst of the elements.

I set up the camera and waited. Like I mentioned above, I knew exactly what I was going for so it was just a case of taking a shot every time the castle was lit up with an interesting background.

It was windy so there was a constant rolling curtain of a backdrop during the near 2 hours that I stood at that spot. At some points the background was mostly clear but then the castle would darken so I knew that a big dark cloud wouldn’t be long in coming.

After a while I noticed that the tide was threatening to maroon me, but it was only a threat in the end. From my vantage point I saw a pair of brightly coloured tourists approach the castle and I knew they’d soon be in my viewfinder along with the luggage bags that they were pulling. Luckily nothing interesting happened with the light while they were sat at the castle taking in the view, and a quick shower of rain soon had them moving along. Later on a car pulled up at the entrance and a woman and her dogs got out for a walk. She must have been Irish because she was impervious to the sheets of rain soaking the castle and surroundings.

After the rain shower the castle stone seemed to be darker and for a short while the sunlight turned golden. For another brief while some picturesque purple tinged clouds floated past the castle but unfortunately the sun was obscured. About 20 minutes before sunset the light had gone flat so there was nothing more for it but to head for home.

I processed several of the exposures that I’d captured and had a tough time choosing the one that worked the best. I’ve included the two that I ended up with in this post.