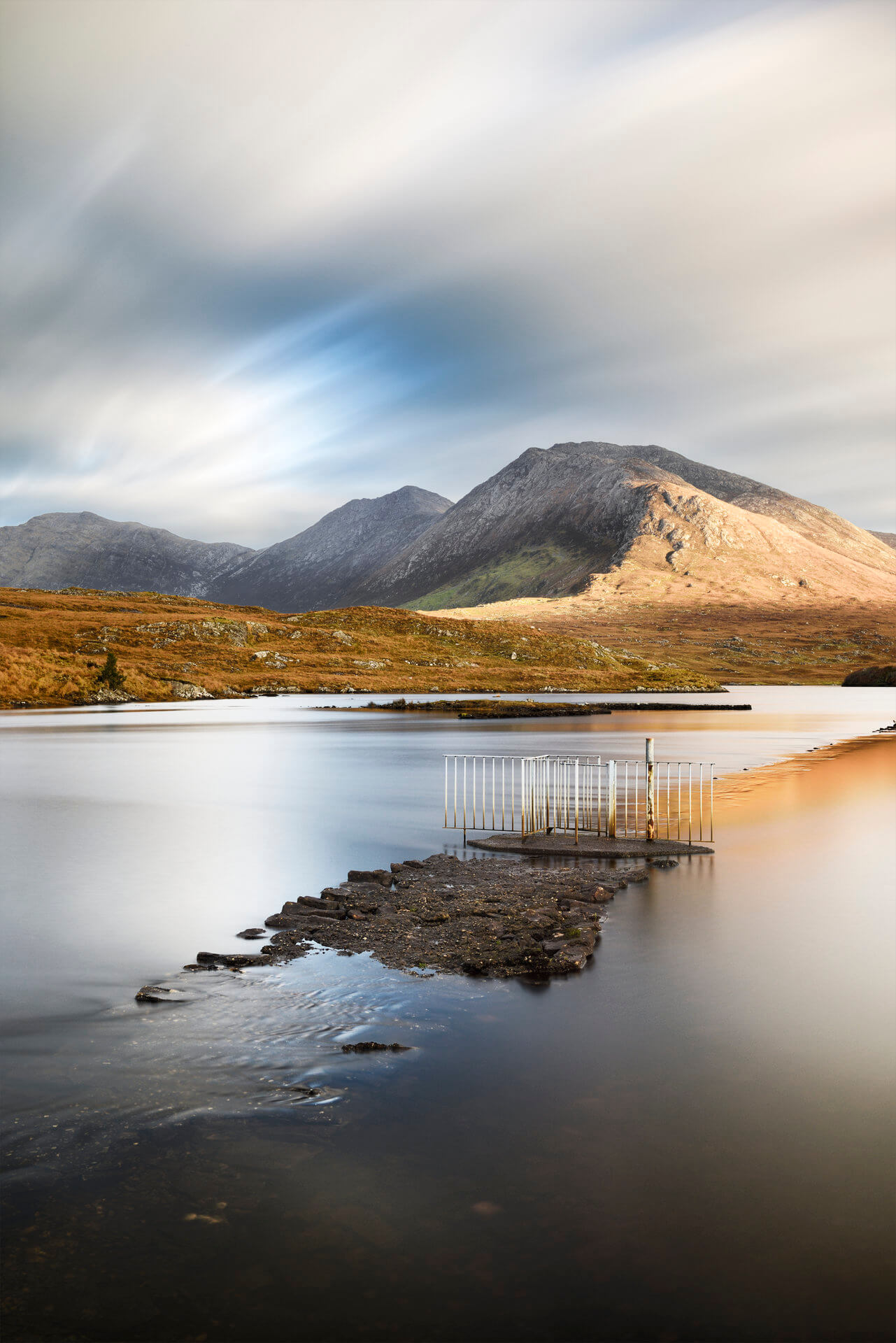 Stood on the shore of Derryclare Lough it was immediately obvious that none of the conditions I was in need of were going to happen. I gave it time but wasn’t long in concluding that I wasn’t going to get the shot that I was after.

I decided to take a look around and when I rounded a huge mound I happened upon a kissing gate on a partly submerged path. I knew that the path was there as I’d seen photographs of it previously but in its current state it would make for an excellent long exposure image. I praised my good fortune and quickly set up my camera.

I took a few shots using the 50mm lens and while I was waiting for the camera to make its exposure I could see light breaking out in patches on the surrounding mountains.

I decided to swap to the 35mm lens as the composition with the 50mm was a bit tight (and I couldn’t move back any farther because of the mound; I was standing on a slope as it was). While swapping lenses I put the 50mm on top of the bag, rather than in it, and watched in horror as the lens rolled off towards the lake. Luckily it stopped just short and after frantically drying off the connections I put it away securely.

I only had the 35mm on for a few exposures but the sun did a fantastic job of adding drama to the scene during that time and it’s one of those shots that I ended up using.

The lough stretches back quite far from the famous vantage point beside the N59 and I had seen that the course of the old Galway to Clifden railway line runs alongside, so I drove along as far as I could, listening to the sound of the car bumper scraping through the pot holes.

I could only take the car so far and set off on foot. I thought to myself how the train must have been pretty small because sections where the course of the railway had been cut through rock were only just wide enough to fit a car through (I read on an information board later in the day that the train only travelled at 24mph).

The scenery was spectacular and it must have been an impressive train journey in its time (the line was closed in 1935). I spent a few hours photographing things that caught my interest and enjoying being completely alone.

I wanted to take a good look around the area and so drove down a narrow road which rounded Athry Lough. At a point where the road is just above the lough there is a panoramic view of the Twelve Bens, and a semicircular wooded island situated in the middle of the lough with almost luminous reeds running along the shore had me setting up the camera.

I tried a few compositions before ultimately deciding on a panoramic image. I waited for the clouds to be in a symmetrical position above the mountains and as soon as the light caught the reeds I got off five shots as quickly as I could (while taking care to level the camera). I stitched them together in post-processing to create the image below.